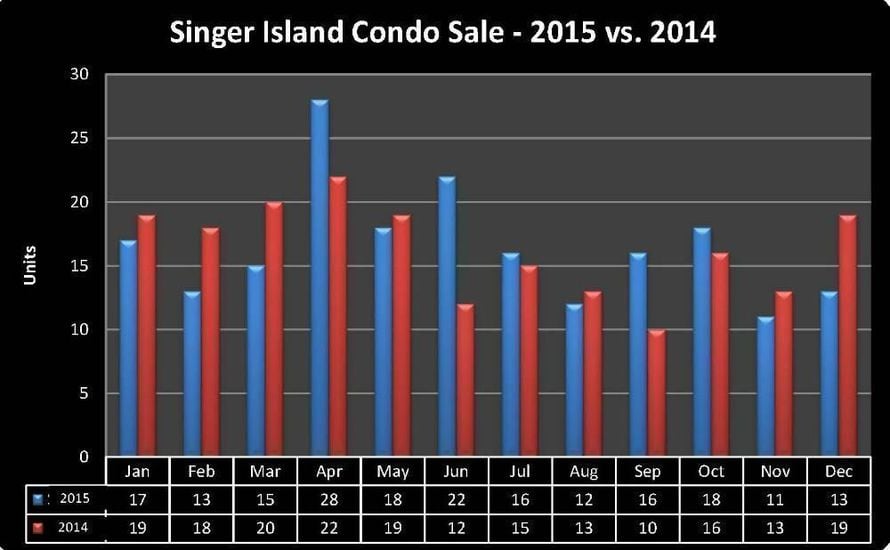 As we look ahead to 2016, it is only fitting to reflect on the year that is ending as well. For Walker Real Estate Group, it has been an especially momentous year marked by growth and outstanding sales. 2015 was another good year for real estate in Palm Beach County with the average property value increasing at a rate of 8.7%. According to Florida Realtors Chief Economist Dr. John Tuccillo, “For most of 2015, the Florida real estate market has outperformed the nation as a whole. In recent months, however, the Florida market rise has eased off a bit. There were 199 condominium re-sales on Singer Island in 2015, relatively unchanged from 2014, although the sales volume increased by 23%.

Looking back on 2015, let’s recap the year in condominium re-sales on Singer Island and the comparison with 2014:

Sales stabilization should continue for 2016 – Against the backdrop of an expanding state economy with growing employment, the number of home sales are expected to increase by 8-10 percent over 2015 and home values are predicted to rise by about 5 percent.

The average 30-year mortgage interest rate started 2015 at about 3.7 percent and remained under 4 percent for most of the year. Mortgage rates will increase gradually through 2016 in response to monetary tightening, and are expected to average 4.4 percent for the year.

Here are Realtor.com’s top 5 predictions for 2016:

2015 has been an excellent year for the Walker Real Estate Group; as the #1 Sales Team on Singer Island, our transaction volume for the year has been over $41 million. Providing our customers a true concierge experience has been a major factor in our success. Trust, integrity and knowledge of the market is our number one priority.