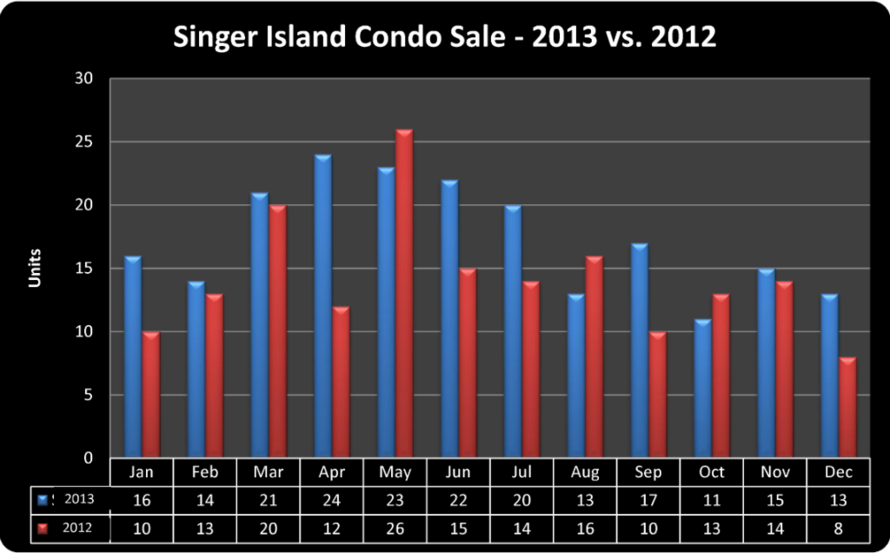 2013 was a good year for real estate on Singer Island and based on all predictions, 2014 will be even better. Across the state, sales are expected to increase 10 percent and home values are looking at close to a 5% appreciation. There were 209 condominium re-sales on Singer Island in 2013, a 22% increase over 2012.

Looking back on 2013, let’s recap the year in condominium re-sales on Singer Island and the comparison with 2012:

Florida’s Housing Sector will grow in 2014, but at slower pace

Look for 2014 to bring continued growth in the state’s housing sector, said Florida Realtors Chief Economist John Tuccillo, though at a slower pace than in 2013 due to changing market and economic conditions.  Freddie Mac Vice President and Chief Economist Dr. Frank Nothaft agreed with Tuccillo’s assessment. He predicted U.S. home sales would grow about five to six percent in 2014, with home sales rising in Florida as well.

Nothaft dismissed fears that this year’s rising home prices could signal another real estate “bubble” in the making, noting that the current increases are “off a really low price base,” and prices remain well below their peak before the mortgage crisis.

Mortgage rates will gradually rise in 2014 as the Federal Reserve discusses tapering back its bond-buying program, he said. “Mortgage rates have gone from dirt cheap to cheap and now I expect them to rise to low – maybe 5 to 5.5 percent toward the end of next year – still very low to where they’ve been historically,” Nothaft pointed out.

Still, economists agreed that even slightly higher mortgage rates will put pressure on the housing market in 2014, as could uncertainty about employment and job growth, questions about the effects of the Affordable Health Care Act, confusion over Dodd-Frank banking regulations and a drop in the number of investors.

“Uncertainty has permeated this recovery, and that will continue,” said Dr. Sean Snaith, director of the University of Central Florida (UCF) Institute for Economic Competitiveness. “Uncertainty over policy, particularly at the national level, is something that we’ll have to grapple with into next year.”

Perhaps the biggest challenge facing the housing market in 2014 – in Florida and throughout the U.S. – will be restricted access to credit, according to Tuccillo.

2013 has been an excellent year for the Walker Real Estate Group; as the #1 Sales Team on Singer Island, our transaction volume for the year has been over $28 million. Providing our customers a true concierge experience has been a major factor in our success. Trust, integrity and knowledge of the market is our number one priority.