It’s hard to believe that the first six months of 2017 are behind us.   The real estate condo market on Singer Island is still struggling to recover to its 2015 levels, 2016 was an off-year for condos, especially the luxury units; and in some respects, 2017 is worse.  There were only 84 condominium re-sales on Singer Island in 1st six months of 2017; 15 percent fewer transactions as the same period in 2016.

Let’s recap the 1st half of the year in condominium re-sales on Singer Island and the comparison with 2016:

Have You Thought About Re-financing?

Nearly 4.5 million borrowers are eligible to refinance and lock in savings on their monthly mortgage payments but haven’t done so, according to a new report from Black Knight Financial Services.  The average borrower stands to save $260 a month, and nearly 700,000 borrowers could save $400 or more per month, the report shows.

According to mortgage buyer Freddie Mac the benchmark 30-year rate reached a new low for the year last week; the 30- 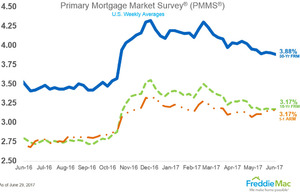 “The recent pause in the upward movement of interest rates continues to encourage late-to-the-game borrowers to refinance,” says Lynn Fisher, the Mortgage Banker Association’s vice president of research and economics.

Why aren’t many current homeowners not refinancing?

“Our data doesn’t tell us about motivation,” says Ben Graboske, senior vice president of data and analytics at Black Knight Financial Services. “It leaves us to surmise that the reason is apathy, lack of awareness and education.”

Some homeowners may still be underwater on their home loans and unable to refinance yet, owing more than what the home is currently worth. Other owners may have a low credit score blocking them from taking advantage of lower rates.

Interest rates in the U.S. are likely to remain low, and U.S. benchmark yields hit record lows last week. The continuing European market uncertainty, declining British pound and strengthening of U.S. dollar make it less likely that the Federal Reserve will move rates up or take other tightening measures this year. That has far reaching implications for U.S. real estate markets.

Also, the 15-year, fixed-rate home loan, popular with homeowners seeking to refinance their mortgages, was unchanged last week at 3.17 percent.

Mortgage rates have remained low even though the Federal Reserve has been raising short-term interest rates. The Fed has increased its key rate by a quarter-point three times since December, most recently this month, to a range of 1 to 1.25 percent.

At the same time, would-be home buyers are facing higher prices and fewer options. Sales listings have plunged 8.4 percent over the past 12 months to 1.96 million. The median sales price in May rose 5.8 percent from a year ago to $252,800.

Data issued last Wednesday by the National Association of Realtors showed that Americans signed fewer contracts to buy homes in May, the third straight monthly decline and evidence that a shortage of homes for sale has suppressed purchases.

The Walker Real Estate Group, as the #1 Sales Team on Singer Island, believes that providing our customers a true concierge experience has been a major factor in our success.  Trust, integrity and knowledge of the market is our number one priority.

Call US today for a free confidential analysis of your home!